This article describes how to use Vagrant on a daily basis. I will introduce to you Vagrant's workflow routines and the most important and useful Vagrant commands.

Vagrant is a helpful wrapper arround different VM providers. Vagrant is a very powerful tool and it is driven by simple workflows. And exactly those workflows are described in this article.

We will discuss five stages/phases which represent a typical Vagrant workflow/life cycle.
They are presented on the diagram below. 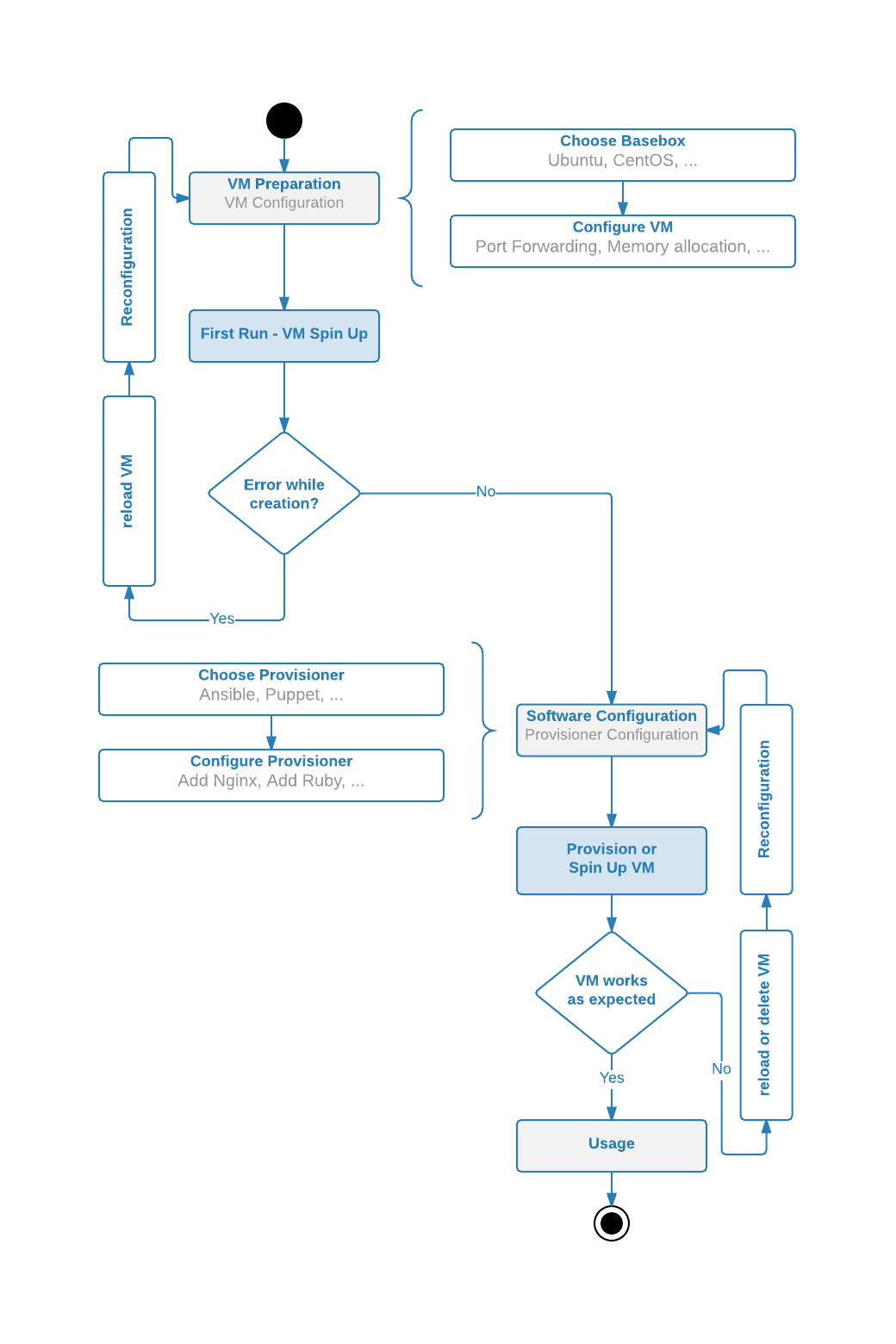 To be able to execute commands in the chapters below you need the following:

This is the first step so we need to prepare our VM requirements.

We should ask the following questions:

When this is calified we start writing our Vagrantfile.

We can begin with creating a totally new, well commented Vagrantfile by executing the following command:

Note
To get more information about the used ubuntu/trusty64 base box click here.

Or just copy the the simple Vagrantfile provided below:

Note
You can get more base boxes from the official Vagrant repository, form the community repository or configure your whole environment with Puppet at puphpet.com.

Now that we have our simple Vagrant configuration we will start our first VM.

The first run phase is the most important step because we need to make sure that the environment is setup correctly.

We can start our first VM with the following command:

If you used the Vagrantfile provided above you will experience the following issue:

It’s easy to fix by creating a shared directory inside the directory which contains the Vagrantfile:

Although this is an easy fix, it illustrates that when an error occured during the first run phase we need to reload or even start our VM’s again - like presented in the Vagrant workflow phases diagram.

A good way to say either we need to start or reload, is to check the status by using the vagrant status command, as in the example below:

In our case the VM was not created at all so we need to start it again:

This time we should get the following issue:

It turns out that when a direcotry is shared over NFS (and that is our case), we need to assign an static IP to our VM.

This can be easily achived by adding the following line to the Vagrantfile:

This time we will just reload our VM because vagrant status shows that it was already created:

Reloading the VM can be achieved with the following command:

Now the first run phase is complete. Our VM has a basic configuration and it is up and running.

We can summarize this chapter with this diagram:

Please note the shaded element on the right side of the diagram above. By executing vagrant up for the first time, vagrant will also trigger the provisioning process. But because we didn’t configure it yet it will not run - that’s why it’s makred it as disabled.

But heads up, we will continue with the provisioning phase in the next chapter.

The provisioning process often described as configuration management is my favourite part.

It takes a lot of time to do it right but it adds a lot of value to the virtual machine - it describes the VM’s role. Specially the software installation (provisioning) part is very time consuming and sometimes requires a lot of tweaking.

To minimize frustration and wasted time I recommennd to use the Vagrant cachier plugin which is described in detail in this blog post.

By using Vagrant we can choose from many technologies starting from simple shell scripts to more abstracted ones like Ansible or Puppet. You can find a full list of supported Vagrant provisioners here in the Vagrant documentation.

In this chapter we want to achieve the Configured VM state presented on the diagram below - we want to install/update software on our previously created virtual machine. 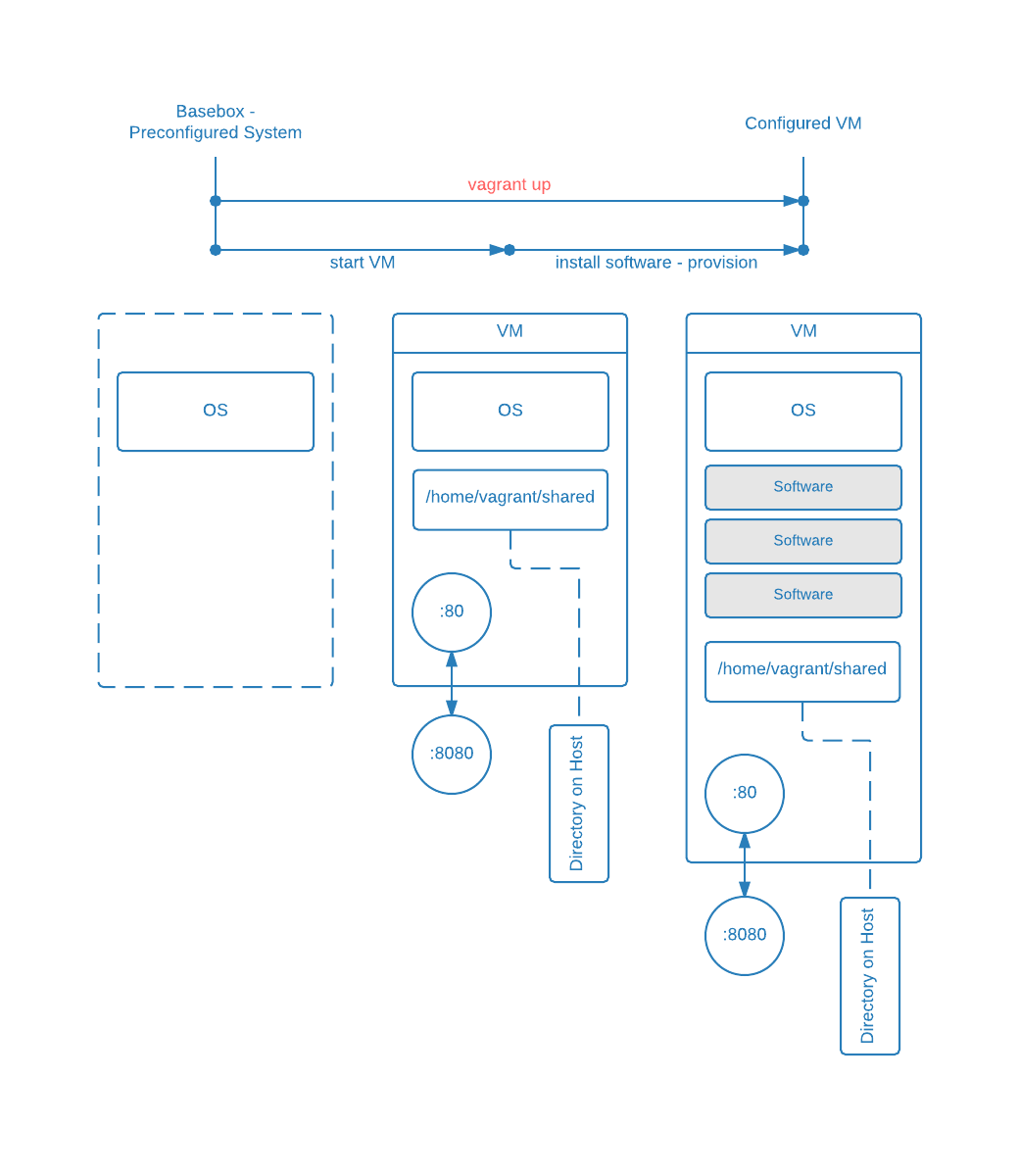 As an example we will add a simple shell script which updates Ubuntu on every start (or provisioning) but just once a month.

First let’s tell vagrant to use a shell script to provision our VM. Add the following line to the Vagrantfile:

We will also need an update.sh file located under provisioners/shell/ in our project directory. It’s a good convention to keep each provisioners configuration in a separate directory. That way things are always organised.

Now let’s look at the update.sh itself:

The script checks if an “update file” for the current VM already exists in the /vagrant/provisioners/shell/ directory. If it exists then it will check the date inside. If the file doesn’t exist or the date is older than a month then the script will perform a system update.

Note
The directory which stores the Vagrantfile (the project directory) is automatically mounted under /vagrant/ on the VM.

Finally we can apply our software updates by executing vagrant provision. The outcome are debug messages like those presented below and an updated Ubuntu on the VM:

It often happens so that during the provisioning process something goes wrong. In this case you need to go back to the preparation phase, adjust the configuration and then depending on your changes and the provisioner, execute vagrant provision or vagrant destroy; vagrant up.

You might ask why should I use vagrant destroy; vagrant up? Why should I destroy my VM and build it from the scratch?

Again as mentioned above: it depends on Your changes, used provisioner or even team structure. The reason why you would like to destroy your VM and then build it from the scratch is the confidence that when somebody new wants to build it he won’t face any troubles.

In this phase we use the VM to achieve our business goal.

We can login to the machine with:

After we are logged in, we can mess arround and destroy everything we like, without worring too much. We are relaxed because we know that the VM can be recreated anytime, anywhere.

For those of you who are tough enough and reached the end of this article I prepared a bonus in form of a Vagrant life cycle diagram. It represents which command can be used during each phase of the Vagrant life cycle. Enjoy! 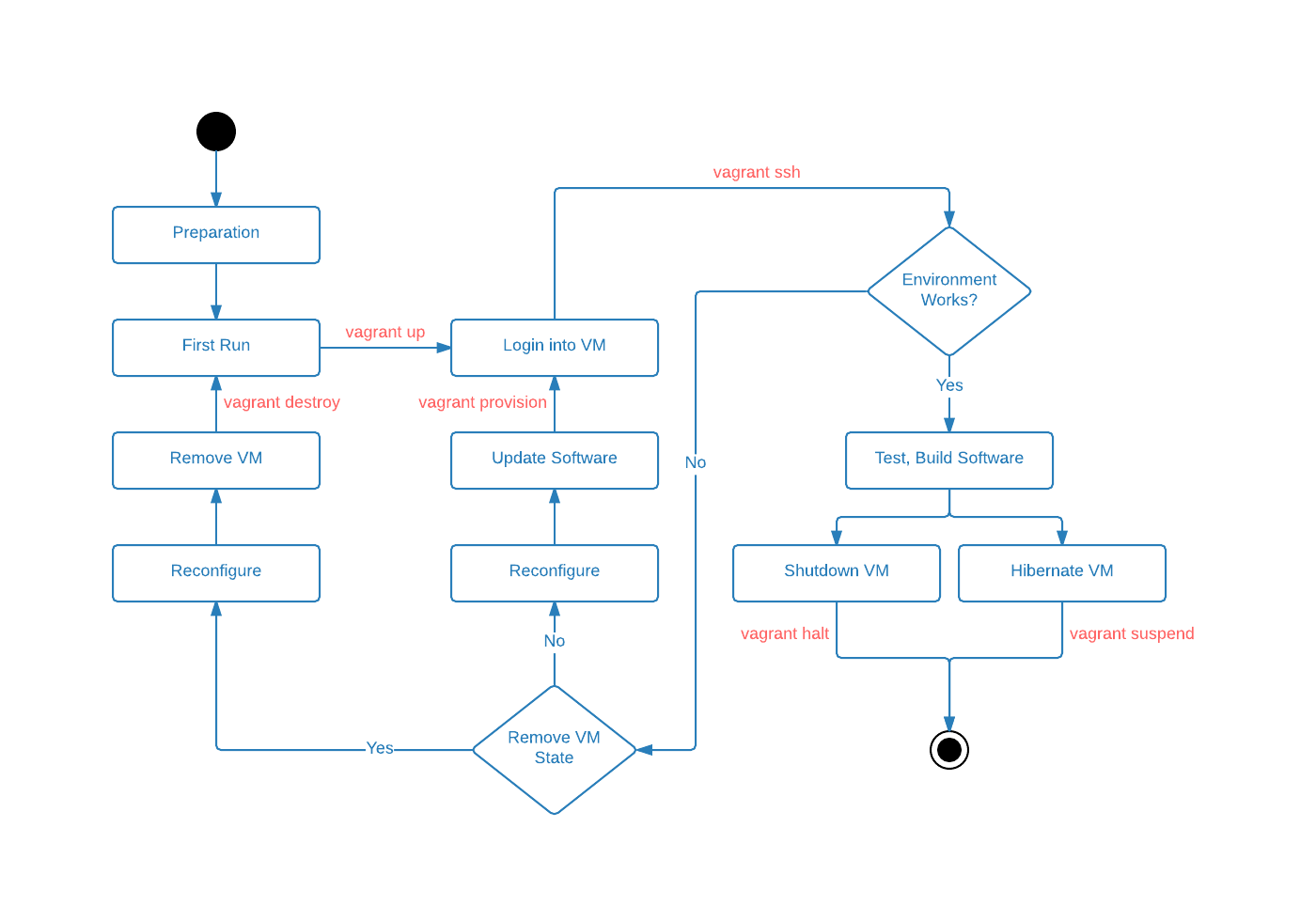 Full Stack Developer, Consultant. Web technology enthusiast with pashion for web architecture. You can follow him on Twitter or Google+.

Then let us work together!

We provide high quality web IT services. From solid front-end architecture, through scalable back-end applications, up to distrubuted data stores. Every piece of your infrastructure is build with passion.